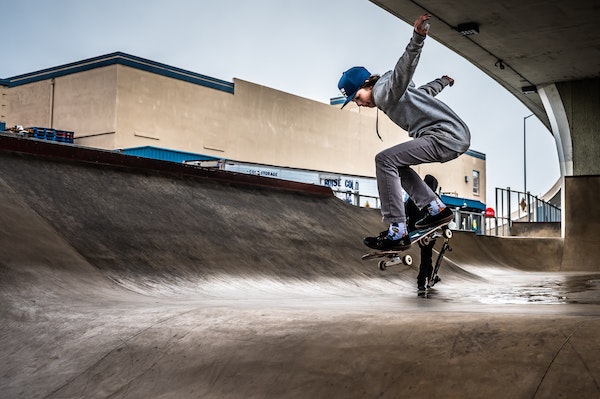 Back in the day when I was a little younger, being a skateboarder was one of the coolest things I could think of to do. The only problem was…I didn’t know a thing about skateboarding. So like any hopeful wannabe, I did the best thing I could do and faked it. (I know, I know…I could have just practiced and gotten better, but for some reason faking it seemed easier)…?!

Everything started coming together. I had skater friends. I went to the skatepark all the time. I dressed like I was a skater. And when I could no longer fool people by just chilling, I jumped on my board and gave it my best shot.

…You can imagine the results. Not pretty. Luckily I came away with only a few hard falls and some road rash, but no broken bones. I was faking it, but I was only fooling myself. (Or, I was until I hit the cement)!

When I remember my stint as a “skateboarder,” I laugh to myself. It’s sort of like the fond feeling you get with nostalgic childhood memories…except I wasn’t a child, and it’s not that great of a memory. But it’s funny, right?!

And you know what? All of us do that same kinda stuff. Because being fake is just plain easier than being real.

“Being fake is just plain easier than being real.”

We wish it wasn’t this way, but often it is. We don’t just fake it at the skatepark, sometimes we do it in our workplaces or at family gatherings…Sometimes we live inauthentically at church too.

In fact, in Revelation 3, Jesus had a lot to say to the church in Sardis about being fake. Their problem was they were posing as something they wanted to be, when really they weren’t that way at all. Sure, things looked good from the outside, but God knew better. At best, they were religious posers.

And the hard truth is…as “gross” as being inauthentic feels to us, God really hates it. Because it’s actually death for us! Why? Because true life isn’t just hearts beating, blood pumping, all systems go on a biological level. Jesus says in John 17:3 that true life is knowing and walking with God!

The reason Jesus called the church in Sardis “dead” is because they were faking knowing God. The reality is God knows our thoughts and motives; He sees us from the inside out. So our faking it doesn’t fool Him. It never has. And the Spirit of God convicts those in those moments, not because He wants to condemn us, but because He loves us enough today to say, “You’re dead,” if we are faking it…if we look all Jesus-like, but there’s nothing there that’s alive.

We can fake our actions to an extent (like I did with skateboarding). But sooner or later, they prove themselves and show other people what’s really going on. People could tell I wasn’t really a skater. And people can tell when we don’t believe what we’re saying about Jesus enough to let it transform our actions. James 2:17 says if we have faith in Jesus but have no works that glorify Him, we don’t have true, saving, biblical faith.

Maybe that’s your story…I know it’s been mine more than once in life! Maybe things in your life are all lined up and everything looks right, but inside it’s all wrong. Usually we can feel it when we’re doing this. Do you have that feeling like you’re faking it?

I like to tell people to not just quote Paul and Moses…live like they did! They were alive because God made them alive. Don’t do good works to get saved – do good works because you ARE saved. Don’t walk around judging, don’t carry a Bible but never lift a finger to help anyone else…because our works prove who we really are.

I’ll be the first to admit – this is a pretty radical side to following Jesus…but the beauty of it is Jesus isn’t content to leave us for dead, kick us aside and grab someone else who has fresh fire in their soul. If you’re dead like the church of Sardis was, if you are faking it, Jesus wants to wake you up today.

And I’m not kidding when I tell you the key to breaking the cycle you’re in and living authentically is owning it and asking God to help you. Jesus wants to use you and me. He will bring you to life afresh, and help focus you on the things that really matter. God wants to do a glorious work in your life, so awaken and live for Him!